I. Registration and payment for the test 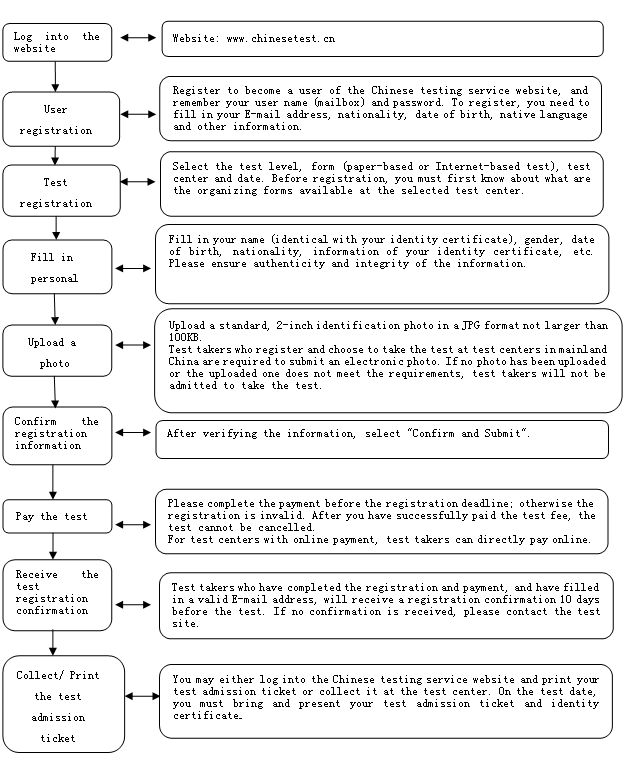 *If you are unable to take the exam due to force majeure such as Covid-19, you could apply for a test cancellation and refund, delay or changing other test type.

Requirements for the photo are applicable mainly to HSK Levels 4-6, HSKK, BCT and YCT oral test, and the test score report for other levels does not carry a photo.

Preparation for the photo and its usage should meet the following requirements:

Format requirements for the photo:

- Test takers’ recent photo for identification (in a standard, two-inch form), and photos of daily life or landscape will not be accepted;

- No hat, scarf, headband or sunglasses are allowed to appear (except for special religious reasons);

- Both black-and-white and color photos are acceptable, and a white background is preferred.

To submit the photo, test takers may either log into the Chinese testing service website and upload the electronic photo in line with guidance from the website or bring the photo to teachers at the test center responsible for the registration and ask them to assist with the uploading.

After receiving the test admission ticket, test takers shall carefully check the accuracy of the information on it item by item. Such information as test takers’ name, gender, date of birth and identification number must be identical with that on his/her valid identity certificate; otherwise he/she will not be allowed to take the test.

IV. How to change the test date

To change the test date, test takers need to log into the Chinese testing service website (www.chinesetest.cn) and enter the Personal Center to make an application. The new test date shall be one at the same level and test center in the same year.

Deadline and charges for changing the test date are as follows:

• Before the registration deadline (including the deadline): test takers can change the test date for free.

• Between the registration deadline and 10 days before the test (including the 10th day): test takers need to pay an amount equal to 30% of the test fee before they can apply for the change during this period.

• Within 10 days before the test (excluding the 10th day): No application for changes of this kind will be accepted.

For test takers to take the internet-based test, the valid period for changing the test date for free is 27 days before the test, and other relevant rules are the same with the paper-based test.

1. Articles Carried for the test

On the test date, test takers must bring the following articles to the test room:

- Identity certificate (copies are invalid) which is authentic, valid, identical with the registration information and carries a photo;

- 2B pencils (two or more) and eraser, in the event that it is a paper-based test.

Other personal articles of test takers cannot be carried with them during the test but shall be placed in the depository or place designated by the test examiner. Do not bring any valuables to the test room; otherwise no compensation will be made for the loss.

Test takers who are unable to present the valid identity certificate and test admission ticket will not be permitted to take the test, nor will the test fee be refunded.

Test takers shall arrive at the exam room half an hour before the start of the test, so as to avoid being late. After the admission, no test takers could allowed to leave the test room until the end of the Listening part.

(1) Test takers shall take the test in line with the arrangements and instructions of the examiner(s).

(2) All the answers shall be provided by filling in the answer sheet with a 2B pencil.

(3) Answering of the oral test shall be in the form of live recording, and test takers shall complete the test with their own recording device separately in line with the instructions and arrangements by the examiner(s).

(4) The internet-based test is a paperless exam, which requires test takers to answer via mouse and keyboard, and the test duration is subject to automatic timing.

(1) Test takers must sit in the assigned seats and have no right to choose seats.

(2) Test takers must follow instructions of the examiner(s), observe the test rules, and independently complete various parts of the test.

(4) In the oral test, no test takers shall temporarily leave the room. If any test takers has to leave, then the departure means to withdraw from the test.

(1) In case of any unfair treatment of test takers due to mismanagement of the test room, such as insufficient test time and damage to the paper or test equipment, which makes test takers unable to complete the test, the Chinese Testing International will make timely arrangements for a new, free test for him/her, but it will not assume any indirect loss and the test site cannot be changed.

(2) In case of any force majeure, such as a natural disaster or accident, which makes test takers unable to complete the test, the Chinese Testing International will make timely arrangements for a new, free test for him/her or fully refund the test fee to him/her, but it will not assume any indirect loss

.6. Absence from the test

If test takers fail to take the test on the test date due to certain reason that is not attributable to the test organizer, no test fee will be refunded.

Test takers shall not open the paper in advance or write down the answer out of the right answering area, neither shall they tear, replace, copy the paper, nor take the paper or the answer sheet outside the test room. In case of any of such acts as cheat, substitution of the test taker, plagiarism, smuggled material, or disobedience to instructions of the examiner(s), the test results will be canceled.

One month after taking the test, test takers can log into the Chinese testing service website (www.chinesetest.cn) and enter his/her test admission ticket number as well as name to view the test scores.

Test taker registered in mainland China, please apply for delivery service of analysis report and score report online which could be sent to any designated address after the score issues(Apply for the Score Reports). As for the other countries and regions, the score report will be delivered to the test center within 1-2 months after the testing date, and test taker can go there for collecting by presenting his/her test admission ticket and valid identification documents.

The test result is a long term available, but the score report to be used for the application to Chinese universities and colleges is valid within two years (from the test date).

1. Delivery of an additional score report

2. Modification of the score report

The HSK score report serves as an important proof of test takers’ Chinese proficiency. In view that some test takers may fail to carefully check the information as required during their registration online or at the test center or fail to carefully check the registration confirmation or the test admission ticket after the completion of the test registration, which may lead to discrepancy between the personal information on the score report and the real information, the Chinese testing service website (www.chinesetest.cn), in order to ensure the normal use of the report, allows test takers to apply for the modification of the score report.

Requirements for test takers’ application to modify the score report:

(1) An application to modify the information is limited to the following situations:

• Misspelling of the name

• Error of the nationality information

• Error of the gender information

(2) Test takers must provide the relevant supporting certificates, such as his/her passport and identity card.

(3) The application shall be filed within the validity period of the test results report (i.e., within two years after the end of the test).