Two HSKs were held in a row at the Confucius Institute at the University of Memphis in May. The results have been published, a pass percentage is 83%, HSK (elementary) is 6/9 (67%), HSK (band Ⅰ) is 7/7 (100%), HSK (band Ⅱ) 6/7 (86%). Most examinees are students from Confucius Institute and International Trade Department and some are from companies or other states. They have learned Chinese for only 1-2 years.

HSK is an international test that aims to test students’ abilities in studying, living and working with Chinese language. Currently there are 161 exam sites in 38 countries around the world. This year, with approval from Hanban, the Confucius Institute at the University of Memphis became the only Chinese test center in the Southeast US. Exams include: HSK, BCT and YCT. Students who pass the exams receive relevant certificates and be recommended by the Confucius Institute to apply for scholarships and go to Chinese Universities for short term Chinese training or for Bachelor, Master and Doctorate Degree studies. The Confucius Institute hopes to attract more Americans to learn Chinese so as to achieve the purpose of promoting Chinese culture through these tests. 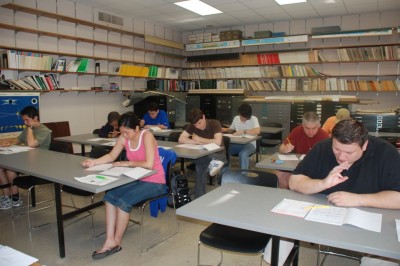