On April 7, the Board of Studies from New South Wales, Australia paid their first visit to China with the primary aim of meeting with the Office of Chinese Language Council International ("Hanban" for short), in order to deepen mutual understanding and seek out new cooperation, particularly in the form of Chinese language testing. The visit was also aimed at promoting Chinese learning in .

Both sides explained their scopes of business to each other during the meeting. Deputy Director Hu Zhiping expressed Hanban’s enthusiasm to serve all foreigners who love learning about Chinese culture and studying the Chinese language. Director Hu also discussed Hanban’s efforts in teaching Chinese in countries around the world. Sincere and confident in the potential cooperation in the areas of Chinese language testing, text book compilation and teacher exchange, he also expressed the hope to figure out a concrete plan with the Australian side. Meanwhile, Thomas Aligounarias, Chairman of the Board of Studies, expressed his hope for wider international recognition for ’s Chinese teaching via a partnership with Hanban. In the end, Deputy Director Hu and Chairman Aligounarias praised the meeting as a good beginning for further cooperation, acknowledging that both share the common idea to promote Chinese learning and expressing their sincere desire to work out practical steps to meet this goal. 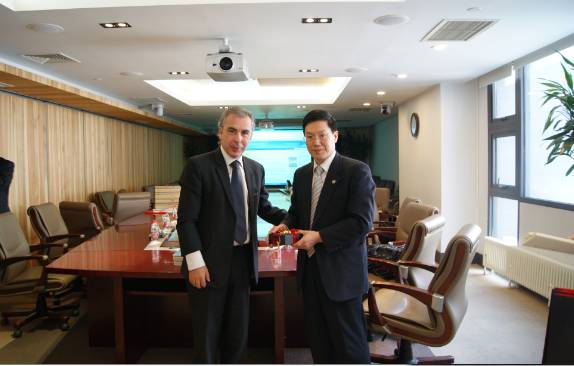